Flotsam Metric is a new band from Wageningen, consisting of scientist, brought together by a silent love and ambition to make music and forge a band. The first formation presented itself on a spontaneous jam session in the streets of Wageningen and turned out to become a band with serious ambitions to perform and contribute to the history of music. It went through a lot of formations during the last 3 years but it started with the solid core of the band, Santos (guitarist) and Tim (sing and song writer) they played their first song together; Hey Joe from Jimi Hendrix. This was well received and soon followed by a rooftop concert on where Santos, who had been playing together for a while already, with a drummer and a bass player, provided the music for the night with Tim taking the mic every opportunity he got to release his sound. After this event it was silent for two years until a famous festival in Wageningen called ‘Droeffest’ took place. Tim (after a few drinks) was able to get his hands on a guitar and took the stage on one of the podia where he played some of his own authentic songs. Santos, attracted by this unique sound, immediately saw a serious potential for a future cooperation. Hence; soon after a jam was organized which Santos and Tim participated and the first musical outbursts of Flotsam Metric were produced. From there the musical expressions started to flow with some small concerts around Wageningen and new band members joining in. First Nicolo, a friend of Santos, who started off as the second guitarist, but at some point took over the bass and now is part of a solid rhythmic section, then Lana (sing and song writer) joined, an old housemate and friend of Tim and making a big part of the Flotsam songs, but currently after a gab year in Aruba not active in the band. And the last member is Julian who took over the drums and now is the beating heart off the Flotsams. Three years after the first signs of life this formation of unconventional minds are Flotsam Metric!

When Flotsam Metric performs they make a show. They work in theme’s to which they create, adjust and fit their songs to. So far they created four shows; ‘The weeping willow’, ‘Sex drugs and rock and roll’, ‘The beatles’ and ‘The Mind Machine’. Currently they are working on a fifth called ‘Histories confession’.

A show with intriguing songs that cover all the social despair and environmental destruction in the world, but also signs of hope. 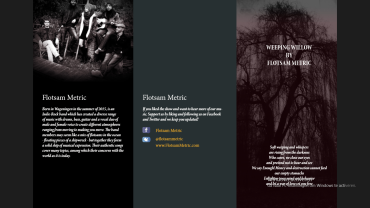 Sex, Drugs and Rock and Roll!

Back to the origine of Rock how it should be!

Celebrating 50 years of stg. Pepper lonely heartsclub band by doing a tribute to the famous rooftop concert of the Beatles in London. 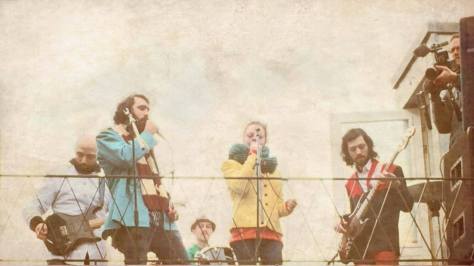 A psychedelic sound and a visual trip. The Mind Machine is the digital drug translated into music and Visuals.

The latest show which is still in the progress of making.

Bringing back the dream

As a starting band it can be chaos! You do not have found your exact music style and take on everything that comes in your way. Its great for building up experience, but this might scare of some band members and makes you have to start all over again everytime you have to find a new replacement. But then when you are about to give up hope and you are close to quiting,  everything comes together and you find your sound and the direction you want to go to. With all faces pointing into the same direction. Thats when you realise you became a band and it is time to Bring Back the Dream!